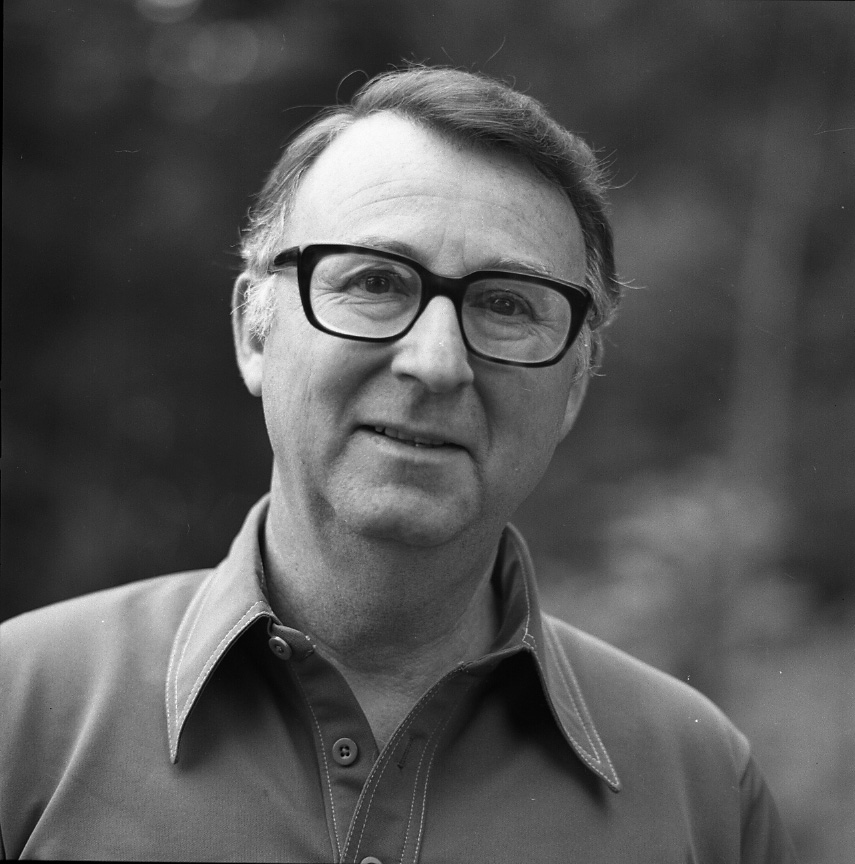 Eye on the “e”: A Digital Exhibit Honoring the Photography of Charlie Cox

Charles Howard Cox (1924-2014) served as the campus photographer at Southern Illinois University Edwardsville (SIUE) from 1961 through 1986. Born in New Orleans, Louisiana, Charlie Cox relocated together with his family back to his father’s hometown, Louisville, Illinois, in rural Clay County, when Charlie was six. Charlie grew up playing the cornet in the community band and participating in the Boy Scouts. He became fascinated with photography at an early age and practiced visualizing and taking photographs long before he owned a functional camera. An avid reader as a child, Charlie envisioned becoming a professional journalist.

Following his service in the U.S. Army during World War II, Charlie obtained a journalism degree at the University of Illinois in 1949. Upon graduation, Charlie took a job at the Newton Press in Jasper County, where he filled a variety of roles as reporter, ad salesman, photographer, radio news writer, and radio announcer. After eighteen months in Newton, Charlie and his wife Jennie bought the Altamont News in Effingham County in fulfillment of Charlie’s dream to own a weekly newspaper. Charlie and Jennie invested very long hours and much hard work for more than seven years to make the newspaper a success.

In 1958, Charlie and Jennie sold the paper and moved to Lebanon in St. Clair County where Charlie began a new job with McKendree College, a tiny Methodist school. Just one year earlier, in 1957, Southern Illinois University Edwardsville had come into being with the establishment of residence centers at nearby East St. Louis in St. Clair County and Alton in Madison County. Intrigued by the opportunity of working at a new university being constructed from the ground up, Charlie Cox officially accepted a position at Edwardsville and started work there on January 15, 1961, as a writer and a photographer.

During his twenty-five year career, Charlie Cox became the most recognizable person at the university. His pleasant personality, engaging manner, sense of humor, and constant presence everywhere made him a much-beloved figure among the university community. The thousands and thousands of photographs that he and his associates created during the 1960s, 1970s, and 1980s captured and preserved the visual history of the institution during its formative years.

The accompanying digital exhibit is intended to honor Charlie Cox’s long, distinguished service and many contributions to SIUE. The photographs presented here constitute only a tiny fraction of Charlie Cox’s photographic oeuvre and are not intended to summarize his entire career. Rather, the photographs presented here primarily reflect the artist’s intense interest in people--the family of students, staff, faculty, and administrators (and mascots) whom he fondly referred to as “hometowners”--and reveal his quiet and his insightful reflections upon the physical environment and atmosphere of the campus.

Viewers interested in photographs by Charlie Cox that portray pivotal historical events that shaped the university and the Edwardsville campus will find many reproduced in Southern Illinois University Edwardsville (Chicago: Arcadia, 2000) by Stephen Kerber and Donna Yates Bardon. Those who retain fond memories of the MRF will discover many Charlie Cox photos in The Mississippi River Festival (Charleston: Arcadia, 2006) by Amanda Bahr-Evola and Stephen Kerber.

It is important to note that Charlie Cox served as a supervisor, a teacher, and a mentor to many apprentice photographers. It is not always possible to determine from the surviving documentation the exact date that every photograph was taken and whether Charlie Cox was the artist who authored every photograph that is reproduced in this digital exhibit. Therefore, this digital exhibit is intended as both a respectful and affectionate commemoration of Charlie Cox’s body of work as an artist and also his role as an educator.

Thank you, Charlie, for helping us to see what we do not always notice and appreciate in the rush of our daily lives.

Printing is not supported at the primary Gallery Thumbnail page. Please first navigate to a specific Image before printing.